Methane hydrate, the so-called monster, lies beneath the sea floor. In sediments on the ocean bottom, microorganism remove oxygen making conditions lower down anoxic. Here, methanogens produce methane that is trapped as the notorious gas hydrates.

In practice, rather than theory, there is a catastrophic difference between the increasing summer melt of Arctic Ocean sea ice and the thaw of methane hydrate down below.

The ocean above the sea floor is stratified into water bodies of differing densities. Image a layer cake of waters each layer with a distinct identity of saltiness and temperature. Rising atmospheric annual temperatures, water runoff from the land and inputs from rivers warms the surface water body. In October, when bitter cold weather returns, sea water freezes again. Salts are left to puddle in cold water around the freshwater ice. This super dense water sinks to displace and drive ocean circulation, a process oceanographers call thermohaline circulation.

Summers in the Arctic, during the last few decades, have seen more and more open ocean water. Once only about a third of the Arctic Ocean was open water. In recent summers, more than two thirds of the sea ice has melted away. With more sea water returning to sea ice, there has been a corresponding increase of sea water circulation out of the Arctic and into the Atlantic. Off of Greenland in the Denmark Strait, cold Arctic water dense with nutrients plunges 11,000 feet beneath warmer, less nutrient-rich Atlantic waters. What has been called the largest waterfall in the world becomes a deep flowing intermediate water body called the Labrador Current. 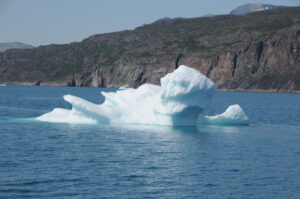 The increased flow of ocean out of the Arctic is apparent with the Gulf Stream having greater meanders, evidence of increased lateral energy release. At the end of the line, in Svalbard fiords on the threshold of the Arctic Ocean, warm Gulf Stream water has surfaced and is causing glaciers to melt on the land. Warm intermediate water enters the Arctic Ocean to accelerate the warming of surface waters, the summer melt of ice and the motion of the world’s oceans.

While it may take a global temperature rise of 1.5 degrees Celsius to commence the hydrate melt down, it’s not like the plug to the freezer was pulled out and door left ajar. During the Paleocene-Eocene Thermal Maximum, 55 million years ago, it took 100,000 years to release the methane hydrate. Even then the methane fizzle was lessened by the chowing down of bacteria and the hoovering up by single-celled organisms that lack nuclei, called Archaea. Massive food chains, for example at deep ocean thermal vents, are fed a cornucopia of such beasties.

With the climate crisis raging all about, the wee beasties, anaerobic methanotrophic archaea and sulfate-reducing bacteria, prevail. To the victor belongs the methane hydrate.

The monster of methane hydrate was created to strike fear, to goad us to action to stop climate change.  The climate crisis is a much larger calamity.  The rise in greenhouse gasses, mostly water vapor including haze and carbon dioxide, is preventing heat from escaping the planet. Instead more energy is retained by Earth. So much energy has gone back into the ocean that hurricanes, including Maria, Irma, Michael and Camille, passing over seawater can gain in strength in twenty-four hours from category 4 to category 5.  A category 5 hurricane has four times the energy, the ferocity and destructive capacity, of a category 4.  Energy retained globally is causing stronger extreme weather events and greater temperature oscillations, hotter and colder, greater droughts and more fires.  Warming waters are less dense than cold waters, and so sea levels are rising.  That also threatens our survival because 71% of the Earth’s surface is water and about 96.5% of all water is in the ocean.  When extreme weather and rising seas combine forces the onslaught of storm surge may be of biblical proportions.  Salvation is gained by working together in concert with one another, and with nature, to better manage water cycles, reduce carbon emissions, and increase the drawing of carbon dioxide from the air by photosynthesis – less impervious surfaces, more green, less individual grabbing and more communal sharing.  We’ve got dragons to slay, together.

This site uses Akismet to reduce spam. Learn how your comment data is processed.