Yet, as sure as the sun rises in the East, the world turns. At the equator, the planetary rotation is 1,000 miles per hour. This results in a westerly flow of winds and ocean currents across the Atlantic from the Azores to Brazil. In the northern hemisphere, the current arcs right into the Gulf of Mexico.

The water body moves clockwise around the Gulf. At the Florida Keys, the current enters the Straits of Florida. A strait is a narrow channel of water that connects two large water bodies. Sea water races first between Florida and Cuba and then between Florida and the Bahamas. Much of the water from the Gulf of Mexico, water that originally came from Africa as part of a global circulation, is jetted through the fifty-mile-wide narrows and into the Atlantic Ocean. To dissipate some of the excess energy, the Gulf Stream exhibits a behavior much like when a mountain river hits a plain or when a train crashes sending train cars zigzagging every which way. The Gulf Stream meanders, forming big loops east and west on its serpentine journey north.

Circulation of the Atlantic has been well known for centuries. Columbus sailed the Azores Current to the Equatorial Drift to the New World. Benjamin Franklin described the Gulf Stream. Thus, it came as no surprise for most when the United Nations Intergovernmental Panel on Climate Change concluded in a their 2019 report that while the AMOC will ”very likely” weaken later this century, collapse is ”very unlikely.”

The recent headlines of the Gulf Stream faltering and shutting down were based on two articles in Nature. One report looked for fingerprints in the massive amount of data from buoys, drones, drifters and satellites. Through model simulations, a “characteristic spatial and seasonal sea-surface temperature ‘fingerprint’” was calibrated. Indications were found of changing seawater temperatures suggesting cooling in the subpolar Atlantic Ocean and warming in the Gulf Stream region. Therefore, they conclude that their findings are consistent (although not necessarily causative) with the Atlantic Meridional Overturning Circulation having record low values in the last 150 out of 1600 years.

The other study examined water temperatures and mapped thermoclines in the Labrador Sea. Researchers also examined sortable-silt grain sizes in two sediment cores beneath south-flowing sea water from the Labrador Sea off Cape Hatteras. Evidence was found indicating the Labrador Current has weakened during the past 150 years. Modelling studies found that increased freshwater fluxes over a few decades could weaken the current. Closer scrutiny found model-data discrepancies and much variability with an unknown number of factors at play in the Labrador Sea, where the West Greenland Current becomes the Labrador Current. Further research is needed to improve the accuracy of projected changes.

There is a fear that meltwater from Greenland is a massive volume of freshwater inhibiting the flow of the Gulf Stream. Extreme warming of Greenland hit a new peak on August 14, 2021, when it rained on the highest point of the Greenland Ice Sheet and air temperatures remained above freezing for about 9 hours.  Such extreme warm wet weather has settled on Greenland in 2019, 2012, 1995, and once in the late 1800s.

The melt water glistens azure blue spread over white glacial ice. The widespread surface melting is easily mapped and measured from satellites. How much of this fresh water puddling on ice will freeze when the weather cools is not known. Likely less than 50% drains away. If the drainage were more efficient, melt water would not pool across the surface. The ice sheet pulls back as it melts exposing land that becomes lush with vegetation. Melt water infiltrates into the ground and is transpired back into the atmosphere.

It is possible that modelers are overestimating the input volume of Greenland freshwater and underestimating the power of this global current called a “stream.” The Gulf Stream is stronger than the Mississippi River plus the Nile River plus the Danube and the Amazon and all the other freshwater rivers in the world, combined. The Gulf Stream moves nearly four billion cubic feet of water per second, nearly 300 times faster than the typical flow of the Amazon River. 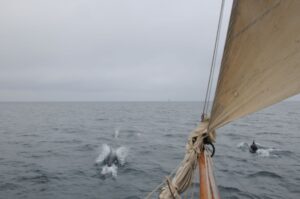 Mariners off Brazil were surprised to find fresh water on the ocean more than forty miles offshore. Less dense Amazon River water tongues out over salt water. Researchers hypothesize fresh meltwater covers the Arctic Ocean and the Greenland Sea and that this will dampen the thermohaline circulation of water bodies, the flow of global currents.

In June 2019, I checked out the hypothesis empirically by going for a swim to taste the surface water in southeast Greenland on the shores of the world’s largest waterfall. Between Iceland and Greenland, in the Demark Straits, cold nutrient rich Arctic water jets through the narrows. Here, it collides with warm nutrient poor Atlantic Water. The denser Arctic water plunges down 11,500 feet to form the East Greenland Current. 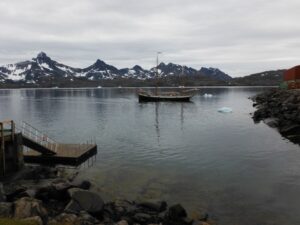 Tasiilaq, Greenland, is bound all around by steep mountains. Through the vertical rock cut, icebergs the size of houses drift in, take a turn around the bay and drift out. The watershed that drains into Tasiilaq is vast and includes the Greenland Ice Sheet behind a mountain range.

Into the large melting pot, I descended the ship’s ladder with strict instructions from the captain to keep my head above the water. Launching into cold water in the company of icebergs, I took three strokes out and three strokes back. The taste elicited memories of gulping unwelcomed mouthfuls of sea water in Nantucket Sound. There was the familiar salty taste of the Atlantic Ocean of 36 parts per thousand salt. Clearly, not the Mediterranean Sea which is 40 parts per thousand salt, or the brackish waters of estuaries. Certainly not fresh. Despite proximity to ice sheet and icebergs, there was no freshwater lens on this bit of Greenland ocean.

Cocooned in our technologies, it is near impossible to comprehend the enormity of the ocean, the continental massiveness of Greenland (ten times the size of Great Britain), the workings of colossal ecosystems, and the interlocking complexity of ocean realms.

Once only about a third of the Arctic Ocean was free of sea ice by the end of summer. Presently, sea ice melts back revealing more than two thirds of the Arctic Ocean. When winter returns in October, there is now twice as much open water freezing. When sea ice forms it is fresh water. When water freezes it becomes a more ordered state and gives up energy as latent heat. Salt concentrates in the cradling cold water. This becomes the densest seawater in the world and sinks. It is this process, in the Arctic and around the Antarctic, that drives the thermohaline circulation of the world’s ocean. A drift buoy submerged into the Gulf Stream will travel around the world in about 1,000 years.

In 2011, the Gulf Stream meandered far up onto the continental shelf, closer to Rhode Island than ever before, indicating more energy to dissipate. 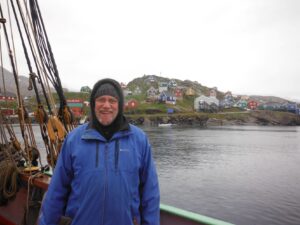 Global warming is the process of greenhouse gases retaining energy from leaving the planet. Heat reflected goes back into the blue planet. When water warms it expands and sea levels rise. Of all the water in the world, less than 2% is ice. Meltwater is responsible for less than 1% of sea level rise.

Locally, when we increase the depth of soils, the amount of vegetation, and reduce storm runoff, reduce sewage discharge volume into the ocean, researchers have found indications that sea level rise may be reduced by as much as 25%. Water vapor is the largest greenhouse gas.  The better we manage water cycles will have profound benefits locally protecting homes from extreme weather events and significant effects globally reducing detrimental greenhouse gas effects.

Climate change has increased heat energy going into the ocean. This manifests into more intense storms with record volumes of rainfall.  Hurricanes passing over ocean water, in just twenty-four hours, strengthen from category 4 to category 5 (with four times the increase of storm power). Increased climate change energy into the ocean is also strengthening the Gulf Stream.

Rather than fret about diminished Arctic Ocean sea ice and the tears of Greenland’s ice sheet, let’s look to America’s oceans, Great Lakes. coasts and watersheds and rally around HR 8632, the Ocean Based Climate Solutions Act.  For more information on the bill, check out Rob’s piece in E Magazine.

Sign our letter and tell your Congressional Representative why to fix climate change there are many solutions to be found by working with nature and new technologies for healthier oceans and watersheds.

One response on “Melting Greenland Ice Sheet, Sea Ice Formation, and the Flow of the Gulf Stream”

This site uses Akismet to reduce spam. Learn how your comment data is processed.