In the epic drama of local governments there are ordinary elected individuals who accomplish extraordinary acts of environmental justice that move us incrementally to nothing less than saving the world, a bluer and greener planet Earth.

The hour that the ship comes in

The entire Massachusetts House of Representatives and many Senators are up for re-election. Join with us to act on behalf of six blue-green bills on Beacon Hill. Here are the bills to speak out for and to inform candidates of your priority:

The Dam Safety Removal and Repair Bill will increase opportunities to remove unneeded dams and help restore rivers to a more resilient, natural condition reducing the risks of flooding and enabling aquatic animals to survive.

The Sustainable Water Resources Bill establishes a process to develop science-based stream flow standards to document groundwater input and to ensure that fisheries and other fresh water species are sustained while meeting water supply needs for public health and safety.

The Expanded Bottle Bill will extend the state’s bottle bill beyond a refundable nickel deposit on carbonated beverage bottles to include containers that hold water, ice tea and other non-carbonated beverages, and to benefit bottle redemption businesses.

The Safer Alternatives to Toxic Chemicals Bill will curb the use and proliferation of toxic chemicals by mandating when there is a safer alternative it must be used. Entrepreneurs who develop safer chemical alternatives are assured of sales in Massachusetts. 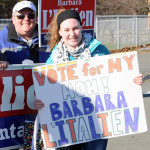 For the 2012 election a number of organizations came together under the wing of “Mighty Green MA.” Twelve of the 14 MLEV endorsed state candidates and incumbents for Beacon Hill were elected. In Duxbury Jason Cutler was elected as a representative, the first time a Democrat has been won the district. Cutler will replace one of the worst legislators on Beacon Hill. In Andover, North Andover, Boxford and Tewksbury, Barbara L’Italien lost by 500 votes a bid to return to Beacon Hill having been defeated two years ago.

Sixty-nine candidates and incumbents for the state Senate and House on Beacon Hill were endorsed by the Massachusetts League of Environmental Voters. We distributed about 1,600 Mighty Green MA stickers. We thank the volunteers who stood out in forty degree weather in support of our Blue Green Heroes to serve on Beacon Hill. Fourteen endorsed individuals were in contested races. Here are some I talked with on election day, Tuesday November 6, 2012. Volunteers for Mighty Green MA will be called in two years to stand for Blue Green Heroes who represent districts others than yours. Please take note.