Human life on this planet as we know it can not be maintained unless greater environmental literacy informs all of our endeavors.
–Jim Elder, Campaign for Environmental Literacy

Congressman Michael Honda has introduced H.R. 4461: the Climate Change Education Act in the US House of Representatives. Congressman Honda, a former teacher, believes that educating children and families about climate change will help more move more people to take action.

H.R. 4461 creates a new $20 million Climate Change Education program at the National Oceanic and Atmospheric Administration, which would make education grants and launch a national information campaign on climate change. Grants would support: 1) national public education, outreach, and communication programs, 2) statewide plans/programs for k-12 climate change education, 3) improving the quality of and access to higher education in green collar industries and green economy-related fields, and 4) teams of faculty and students to deliver climate mitigation and adaptation services to local communities.

The majority of Americans lack a basic understanding about climate science, how it’s changing our environment, climate economics, and the relationship between economics and the environment. This lack of understanding is a key factor contributing to our nation’s struggle to act to effectively mitigate and adapt to the causes of climate change. H.R. 4461 has the potential to significantly change that, and to help the U.S. catch up to the rest of the world on this vital subject.

Join with us in urging Congressional Representatives to support HR 4461 by signing on as a co-sponsor. 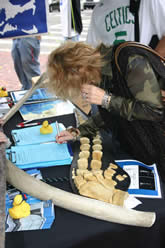 The Conference on Ocean Literacy June 7-8, 2006 in Washington DC featured 49 high level speakers, who addressed the pressing needs and opportunities for ocean literacy from many perspectives. The majority of the speakers spoke to how their personal voyages to become ocean literate citizens came from life-changing experiences: for the Chairman of the Council on Environmental Quality, it was scuba diving with his son; for Silvia Earle, it was exploring parts of the ocean never seen before; for Bob Ballard, it was being in a submersible; and for former search-and-rescue Coast skipper and current Congressman from Mississippi Gene Taylor, it was navigating turbulent brackish waters that were unimaginable before Hurricane Katrina destroyed his home community.